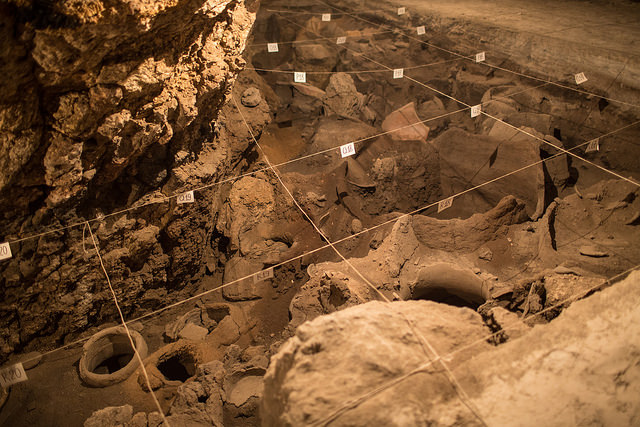 Wine has been a part of human life, culture, and diet, since time immemorial. In ancient Greece, wine was praised by poets, historians, and artists, and was frequently referred to in the works of Aesop and Homer. Dionysus, the Greek god of wine, represented not only the intoxicating power of wine but also its social and beneficial influences. Wine is far older than recorded history and could date back over 20 million years ago, as fermenting yeasts evolved together with fruit bearing flowering plants. People began to grow grapes probably a little after they began growing wheat, around 8000 BC. In ancient times, wine was considered to be a magical, spontaneous gift of nature. The oldest winery in the world has been uncovered in a cave in the mountains of Armenia. An international team of researchers discovered drinking bowl, a grape press, a cup, and fermentation jars dating to about 6,100 years ago in the cave at the area called Areni-1 in Armenia. Older evidence of wine drinking has been found, but this is the earliest example of complete wine production. The Areni-1 cave complex is located in the village of Areni in the Vayots Dzor province of the Republic of Armenia. 7 months before the winery was discovered, the world’s oldest leather shoe, the Areni-1 shoe, was found in the same cave. The village of Areni it’s known for its wine production. The press and wide, shallow vat that was found in the cave are similar to foot-stomping type equipment used by people throughout the region even up into the 19th century. Botanists examined the find say it was the species Vitis vinifera, the same one used to produce the vast majority of wine today. Gregory Areshian, co-director of the excavation and assistant director of the University of California Los Angeles’s Cotsen Institute of Archaeology says the wine would be comparable to a modern unfiltered red wine and may have had a similar taste to a merlot. As Areshian, says before this winery was discovered, the oldest known winery was in Israel and dated to 1650 BC. Archaeologists could not tell a lot about the people who distilled and drank the wine, but for them, it’s clear that the people who produced wine in the cave winery used it for ceremonial purposes. Probably for funeral ceremonies, since it was discovered that the cave was once an important cemetery site. This discovery shows that people developed agriculture and that they had horticultural skills even back in 4,000 BC. And as Areshian says, “Producing this wine would have been a high technology of the time incorporating detailed knowledge of watering cycles, pruning the vines, how to deal with pests and the fermentation process itself, which is more complex than brewing beer.” [horizonweekly] The entrance of the Areni-1 cave complex. Photo Credit